Acacia Students Use Art to Express Themselves 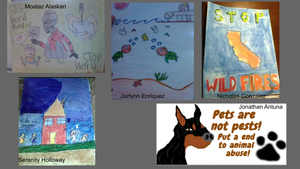 Acacia students advocated for a project to highlight social causes they were passionate about.

This was a first attempt for both the playwright, Isabella Brown, and the director, Jasmine Torres.  As an ensemble, they learned to work together, applying a collaborative approach to the project. Throughout the process, the students demonstrated versatility and critical thinking by adapting their project to meet the requirements of the festival. Since the festival is usually in-person, there were some adjustments made to the lineup. For instance, rather than do full length plays by region, this year schools could submit three to eight-minute recorded scenes each in different categories.

“With so many good ideas, getting the running time low enough while still telling a cohesive story was a real challenge,” shared instructor Joshua Brady. “One of the actresses had to convey two characters. All three performers had to adjust from acting on stage to learning camera acting techniques, which can be a very difficult transition for actors.”

“There have been two major virtual theatre festivals in California this year. We are the only school who took first place in both of them,” stated instructor Joshua Brady, English/Theatre teacher at Western Center Academy.

Under the direction of Joshua Brady, students also competed in the Drama Teachers Association of Southern California’s (DTASC) Fall festival. 2020 marked DTASC’s 100th year as an organization, celebrating their long tradition in Southern California and distinguished list of alumni, including Cuba Gooding, Jr. and America Ferrera. At the Fall festival, students won first place in the Junior Varsity (JV) category for Small Group Comedy and received two fifth place finishes for Varsity, one in Original Work and the other for Small Group Comedy.

While classes in the Arts, Media and Design industry sector have looked a little different this year, Brady’s students continue to adapt and excel with plans to compete in DTASC’s Shakespeare festival this spring.